Michelle Burton, principal interior designer of Designing Divas is the winner of Bathroom Design of the Year at the 2015 HIA NORTHERN NSW HOUSING AND KITCHEN BATHROOM AWARDS held in Coffs Harbour (11th September). This is the second time in three years Michelle has won the Housing Industry Association’s Bathroom Design of the Year Award. Her winning entry will be judged at the NSW Finals Awards later in the year.  Entries for this award come from all over the Mid north coast and Northern NSW. Michelle’s interior design company, Designing Divas is based in Port Macquarie and at the event she thanked her associates involved in the stunning bathroom in a new home built on the Hastings River on the North Shore of Port Macquarie.

Built by Brandon Calder Homes;  building design by Derek & James Collins of CollinsWCollins; Reece in Port Macquarie supplied all the fixtures and fittings and a special mention to ColorTile in Port Macquarie and the fantastic work of tiler Darren Roach. 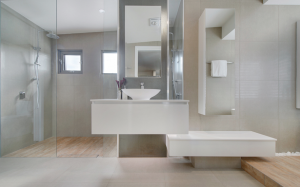 Michelle Burton started her design company, Designing Divas in 2012 having moved to Australia from Los Angeles, via Sydney.

“It must be something in the fantastic air in Lake Cathie”, Michelle replied to the host’s question of what makes her such a good bathroom designer. This year she also won the award for Kitchen Design of the Year 2015. See the winning entry at www.designingdivas.com.au